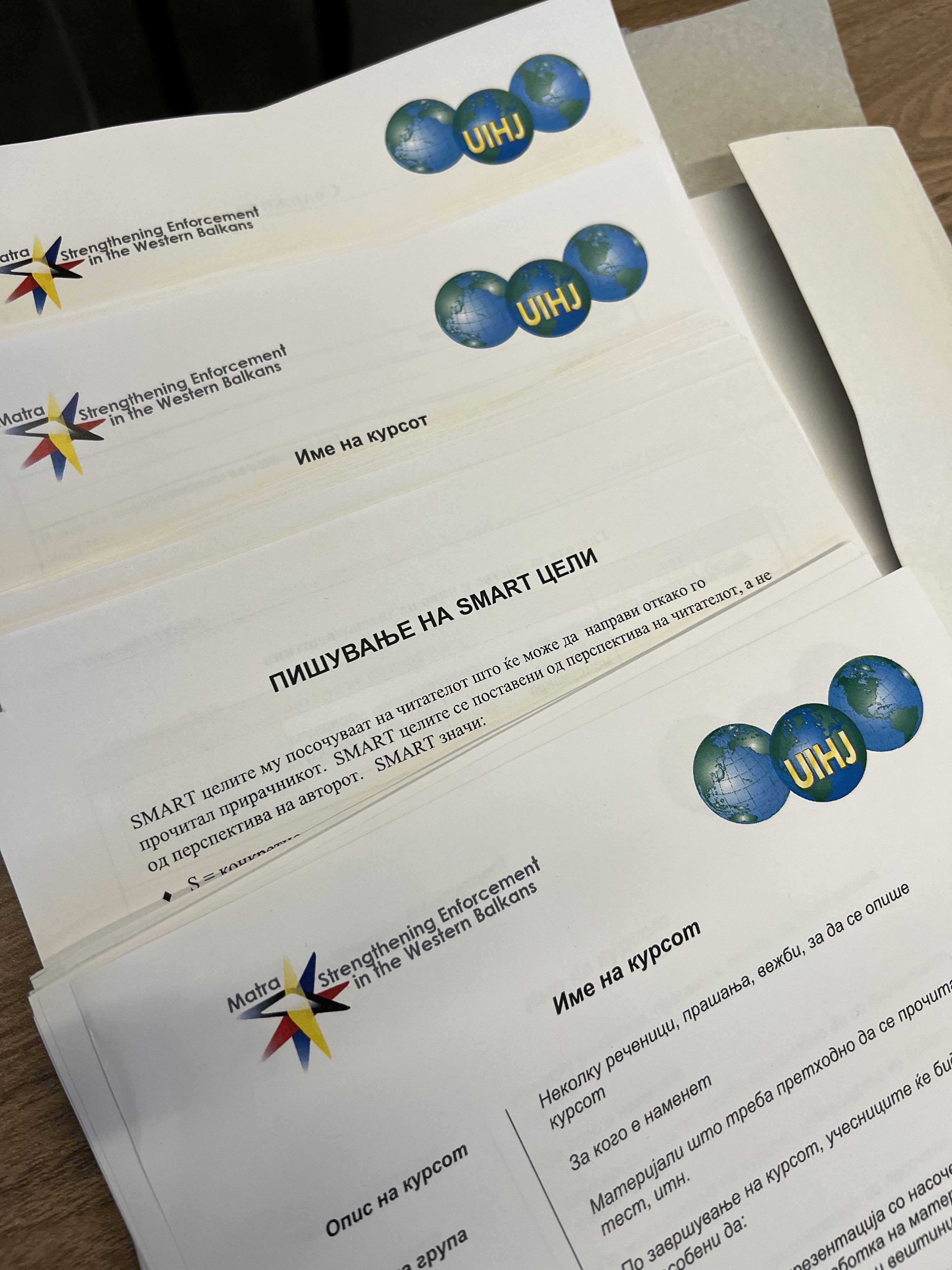 The UIHJ is involved in many international projects aiming at strengthening the rule of law, especially when it come to enforcement and the profession of judicial officer and enforcement agent. This article is intended to provide a scope of our recent activities within the framework of one of these projects where the UIHJ is represented by its First Vice-President, Jos Uitdehaag.

In September 2020, the Strengthening Enforcement in the Western Balkans project was started. The project focuses on the effective functioning of enforcement agents within the legal systems in Albania, Kosovo*, Montenegro, North-Macedonia and Serbia. In addition, it amplifies regional cooperation between these legal systems. The project is implemented by the Center for International Legal Cooperation (CILC) with the support of the Dutch Ministry of Foreign Affairs through the Matra programme and in close cooperation with the UIHJ.

The main objective of the project is to strengthen the private enforcement systems in the Western Balkans in dealing with cross-border enforcement and make them more accountable by strengthening relevant mechanisms for monitoring and control. The project will address these topics, taking the aforementioned European standards as a starting point. The theory of change is that by enhancing the mechanisms for and skills of people entrusted with monitoring and control, as well as the capacities of private enforcement agents to deal with cross-border enforcement, the systems as part of the judicial chain will become more transparent and professional. This will then also lead to more trust of creditors, debtors and the general public in the judicial chain and private enforcement systems in particular. The intended outcomes and outputs will be realised through a number of activities, including trainings, workshops and roundtables.

Week 30 May: different coordination meetings with the project management and with the ministry of justice of Kosovo*.

Week 6 June: start of the next BESP meeting to (first) Belgrade. Meetings with the ministry of justice, the Serbian Chamber of Private Enforcement Agents, and professors in civil law and private international law from two different universities. Like in Albania, together with a Serbian professor at law and a representative of the Serbian ministry of justice, a detailed legal analysis was made of the Serbian enforcement system. This legal analysis was presented at a round table in Belgrade in the presence of representatives of the ministry of justice, including the deputy minister of justice and the Chamber of Private Enforcement Agents. In the weekend; travel from Belgrade to Skopje, North Macedonia.

Week 13 June: on Monday we started in North Macedonia with meetings with representatives of the ministry of justice (department for supervision and the department for international legal cooperation), followed by meetings with the Chamber of Private Enforcement Agents, with a German development organization and with a professor in private international law. On Tuesday-Thursday the first three-day session of a Train the Trainers program for enforcement agents and judges from North Macedonia was held. On Thursday evening; travel to Pristina, Kosovo*. On Friday: meetings with the Ministry of justice, followed by meetings with the Kosovo* Chamber of Private Enforcement Agents, The Justice Academy and a professor in private international law. On Saturday ended this mission since in week 20 June the Africa- Europe meeting is planned.

Week 20 June: from 23-24 June the 6th Africa-Europe meetings of Judicial Officers in Cotonou, Benin. On 25 June: travel from Cotonou, Benin to Podgorica, Montenegro.

Week 27 June: 27 June is reserved for meetings with the Ministry of justice, the Montenegrin Chamber of Private Enforcement Agents, the judicial Training Centre and a professor in private international law. On 28 June, presentation through a round table of the legal analysis of the Montenegrin enforcement system which was developed by a Croatian professor in civil law and a Montenegrin expert from the Ministry of justice. On 29 June: travel from Podgorica to Skopje, North Macedonia. On 30 June and 1 July, a regional Forum on the 2019 HCCH Judgment Convention, where prospects for the Western Balkans is organised. This event is co-organised by the BESP project, together with the project “Legal Reform for Economic Development in the Western Balkans” financed by the German Federal Ministry for Economic Development and Cooperation (BMZ) and implemented by Deutsche Gesellschaft für Internationale Zusammenarbeit (GIZ), in cooperation with the Hague Conference on Private International Law (HCCH) and the UIHJ. The aim of this Regional Forum is to exchange and debate on the prospects and benefits of the HCCH 2019 Judgments Convention for the Western Balkans in the presence of representatives from the Ministries of Justice, Ministries of Foreign Affairs, Judicial Training Institutions, Chambers of Enforcement Agents, and legal experts. On 2 July: departure to Podgorica, Montenegro.

Week 4 July: 4-6 July Public Relations Bootcamp for Chambers of Private Enforcement Agents in the Western Balkans. The Bootcamp is the launch of a training and coaching trajectory to strengthen the public image of the Chambers and to support its internal and external communications. On 7 and 8 July: BESP management meeting with the BESP local coordinators within the different legal systems in the Western Balkans.