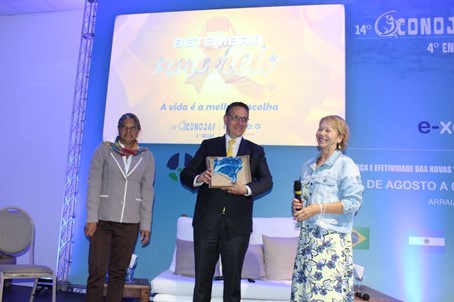 By Marc Schmitz5. September 2022No Comments 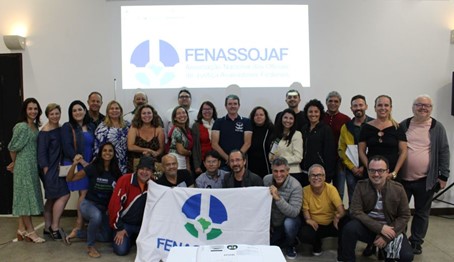 The Council of Representatives of the National Association of Federal Judicial Officers Evaluators of Brazil (Fenassojaf) met on the first day at Eco Resort Arraial D’Ajuda for the first face-to-face meeting of the group after the period of the Covid-19 pandemic. Paulo Teixeira, chairman of the Order of Solicitors and Enforcement Agents of Portugal (OSAE), was also in attendance.

The representatives of the UIHJ had an opening speech at this meeting and highlighted the working partnership between UIHJ and Fenassojaf through its director of International Relations Malone Cunha.

The UIHJ discussed the holding of the 25th International Congress of Judicial Officers, scheduled to take place in 2024 in Rio de Janeiro and straight awa     y invited representatives of Brazilian associations to participate. “I hope to see you all in Rio de Janeiro in 2024”, emphasised Secretary Patrick Gielen. 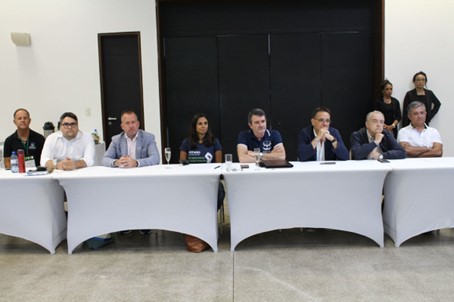 More than 240 Judicial officers were registered for the Congress. Also representative from Argentina, Belgium, Portugal and Spain participated at this congress. With the theme “e-xecutar: The strength and effectiveness of new technologies for the Federal Judicial Officer”, the largest event of the public service took place until the 2nd of September. 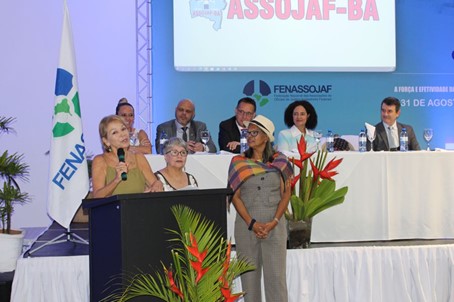 The union between all judicial officers and hope were the keywords of the opening of the 14th Conojaf and 4th Enojap, in Porto Seguro.

At the opening, Fenassojaf President João Paulo Zambom highlighted the three years of waiting for a new face-to-face meeting. He recalled the more than 100 Judicial Officers who died during the pandemic, as well as friends and family, and invited participants to observe a minute of silence in honour of everyone who did not survive Covid-19.

At the end, the President of Fenassojaf thanked everyone in Bahia and registered the expectation of a fruitful event. “Let’s go together because together we are stronger”.

Marc Schmitz attested at the opening speech to the excellent relationship with the Fenassojaf, mainly through Director Malone Cunha as a member of the board of UIHJ.

Marc Schmitz pointed out the creation a few months ago of the Latin American Forum of judicial officers, as an opportunity for UIHJ member countries in the region, as well as for other countries in this part of the world that are interested in the work in joining to UIHJ, in the exchange of good practices and discussion on the future of the profession.

“Our profession exists all over the world, either under the status of a liberal profession, as for example in France, in the Benelux countries or in many African countries, or under the status of civil servant, as for example in many Latin American countries, Germany, Austria, Italy or many others. But we all have something in common: we enforce court decisions. And what would a judgment be worth if it could not be enforced efficiently? It wouldn’t even be worth the paper it’s written on,” he commented. 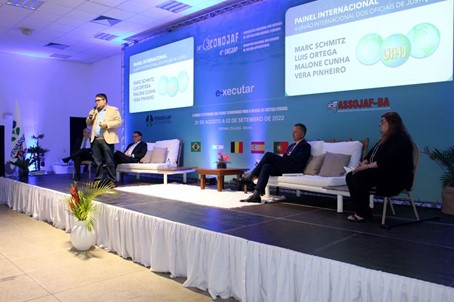 Marc Schmitz, Luis Ortega, Patrick Gielen, Malone Cunha, acting as moderator, and Vera Lúcia Miranda, Permanent Delegate of the UIHJ in Latin America, participated in this international panel to explain the UIHJ and all the works done the last years.

The highlight moment was without any doubt the update on the next International Congress of Judicial Officers that will be held in Rio de Janeiro in May 2024.

During the explanation, Marc Schmitz presented the history of the UIHJ, created in 1949 during a National Congress of the French National Chamber of Judicial Officers. 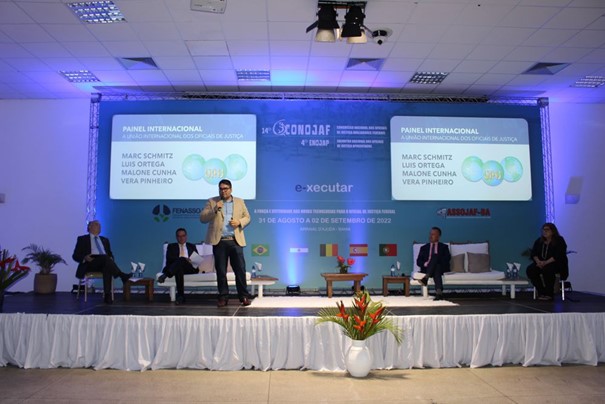 He explained that each national entity or association, including the Fenassojaf, is represented on the UIHJ Permanent Council by one or more delegates. He mentioned the election of Malone Cunha as member of the board of UIHJ during the 24th International Congress of Judicial Officers that took place in Dubai (United Arab Emirates) in November 2021.

He added that one of the functions of the UIHJ is to represent its members in international organisations or institutions, including Uncitral, the World Bank, the Hague Conference on Private International Law, the Council of Europe, the European Commission, Ohada, ELI…

For Marc Schmitz, training and promoting international exchanges are one of the concerns of the UIHJ, which regularly organises trainings with the participation of judicial officers, judges, academics, among others.

According to him, times are changing. “The profession has faced and will face many changes and the use of technologies can be a powerful tool for the function”.

Ambassador in international relations with the Judicial Officers, Vera Pinheiro Dos Santos explained about the arrival of the UIHJ in Brazil. In 1997, a Congress was held in Rio de Janeiro. Based on the perception that judicial officers were present in more than 100 countries, the permanent delegate in Latin America understood the importance of strengthening relations with representative entities not only in Brazil, but also outside the country.

Still on the work carried out by the UIHJ, Vice-President Luís Ortega addressed relations with other countries and the entity’s performance.

During his speech, Luis Ortega also spoke about the holding of the 25th International Congress of the UIHJ, scheduled to take place in 2024 in Rio de Janeiro, and said he hopes everyone will be at this great event “to further strengthen relations with the entities”.

Patrick Gielen, General Rapporteur of the 25th International Congress of Judicial Officers, also mentioned the event and emphasised that this will be the opportunity to welcome new members of the UIHJ. “It is the most important event, worldwide, for the judicial officers”, he pointed out.

For the first time, the UIHJ will organise an international congress in Latin America. This 25th International Congress will take place from 8 to 10 May 2024, at the Fairmont hotel, located on Copacabana beach, in Rio de Janeiro. He mentioned that special rates will be available for those registered who wish to stay at the event’s hotel, as well as other accommodation options close to the venue.

The General Rapporteur also informed that the logo and the topic of the congress will be launched in the next Permanent Council of the UIHJ to take place in November 2022, in Paris.

In the end, Patrick Gielen said it was impossible to describe the feeling of being a participant, in a UIHJ Congress. “The emotion of participating in a UIHJ Congress is enriching, not only for its technical and scientific content, but also for the human contact, meeting colleagues from all over the world. I’m sure you will be in Rio de Janeiro in 2024”.

A video produced by Fenassojaf’s International Relations board about the next International Congress in Rio de Janeiro in 2024 was also shown to participants of the 14th Conojaf.

At the end of the international panel, President Marc Schmitz was honoured by the Association of the Federal Judicial Officers Evaluators of Bahia (Assojaf/BA) with the delivery of a souvenir of the state of Bahia.