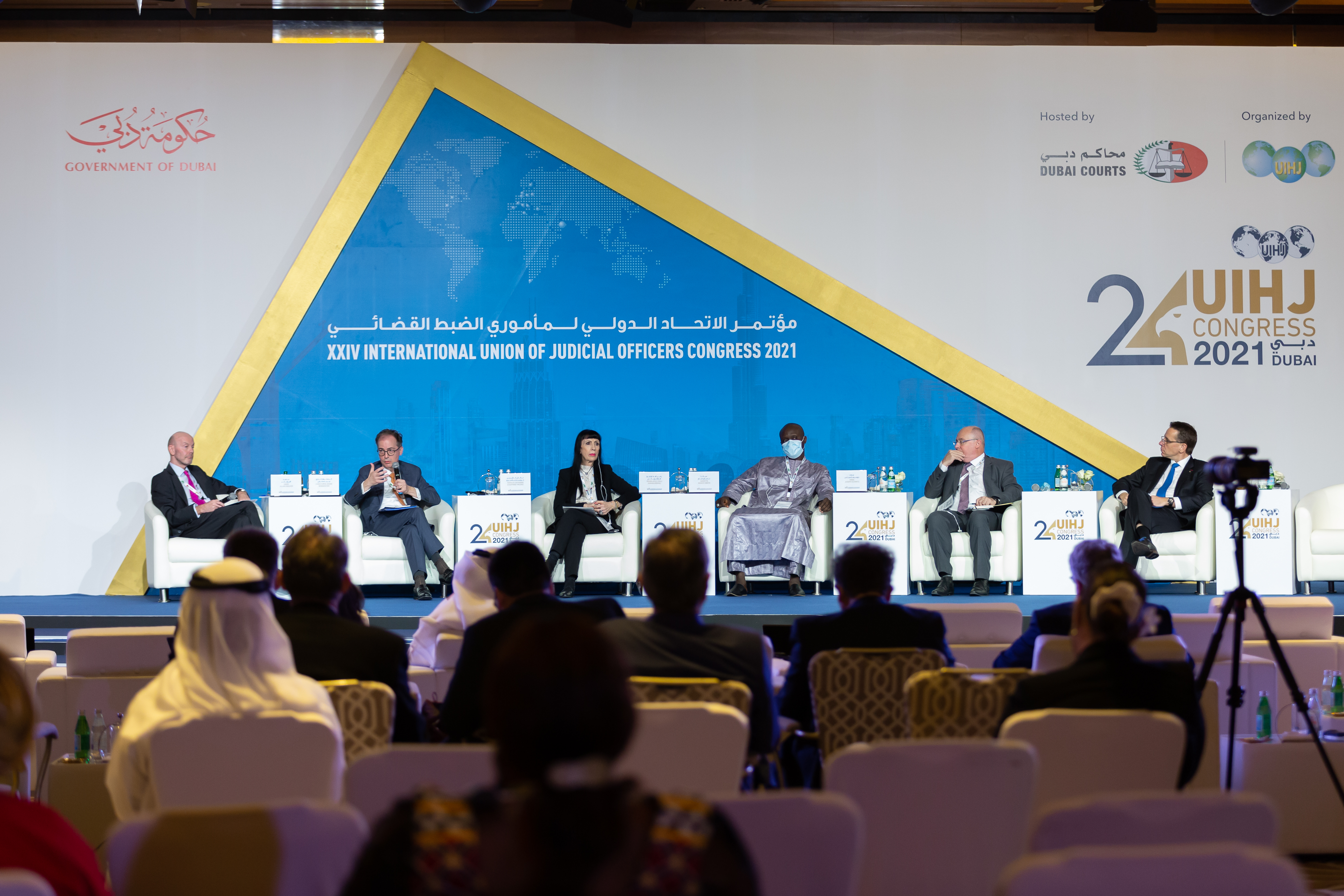 By Marc Schmitz20. December 2021No Comments

More than 500 participants for the 24th International Congress of the UIHJ in Dubai from 23 to 25 November 2021, on the theme of “Cyber ​​Justice: New Opportunities for the Judicial Officer“, the presentation of the Global Code of Digital Enforcement, and the membership of the 100th member organisation of the UIHJ.

The International Congress of Judicial Officers, which is held every three years, is the supreme body of the International Union of Judicial Officers. For the first time, it was held in the Middle East, in the extraordinary city of Dubai, United Arab Emirates, in the prestigious premises of the Intercontinental Hotel (Festival City), under the high patronage of His Highness, Sheikh Maktoum bin Mohammed bin Rashid Al Maktoum, Deputy Ruler of Dubai and Deputy Prime Minister, Minister of Finance and Chairman of the Dubai Judicial Council. The congress was organised by the UIHJ and the Dubai Courts, represented by its Director General, His Excellency Taresh Eid Al Mansouri, and whose perfect organisation must be highly praised.

The general rapporteur of the 24th International Congress of Judicial Officers was David Walker (Scotland), Deputy Treasurer of the Board of the UIHJ, who has accomplished a titanic work for three years and for everyone’s benefit.

Five international organisations and institutions honoured the work of the congress with their presence, despite the Covid-19 pandemic: the Hague Conference on Private International Law, the Council of Europe’s European Commission for the Efficiency of Justice, Unidroit, the Superior Regional School of Magistracy (Ersuma) of the Organisation for the Harmonisation of Business Law in Africa (Ohada), and the International Association of Legal Science.

The Global Code of Digital Enforcement, drawn up by the UIHJ and its Scientific Council and resulting from several years of work, was officially launched.

The membership ceremony for new members of the UIHJ allowed seven new organisations to join the ranks of the UIHJ, including the first from Oceania (the Chamber of Judicial Officers of French Polynesia), as 100th member.

At the end of the work of the congress, and of its traditional wishes reproduced below, the new Board of the UIHJ was elected for the 2021-2024 term. Its chairman, Marc Schmitz, was reappointed for three years.

The works of the congress have been published. A copy was handed to each participant. It is possible to order this book on the Editions Larcier website (CLICK HERE).

You will find hereafter a general report of the works of the three days of the congress, of great richness and exceptional density, attended by nearly 550 participants.

The opening ceremony included words of welcome from His Excellency Abdulla Sultan bin Awwad Al Nuaimi, Minister of Justice of the United Arab Emirates, His Excellency Taresh Eid Al Mansouri, Director General of the Dubai Courts, and Marc Schmitz, President of the UIHJ.

The congress was organised around three workshops, six panels and various presentations, lectured by nearly 50 speakers.

The three workshops were resolutely turned towards digital technologies. Their themes were respectively:

Panel 3 (“The Acceleration of the Digitisation of Judicial Systems“) was moderated by Rui Miguel Simão, Secretary of the Board of the General Council of Solicitadores of Portugal, and member of the Innovation Team of the UIHJ. The speakers were Dimitriy Aristov, Director of the Federal Bailiff Service of the Russian Federation, member of the Board of the UIHJ, Alex Irvine, judicial officer (Scotland), former President of the Society of Messengers-at-Arms and Sheriff Officers of Scotland, Luis Ignacio Ortega Alcubierre (Spain), Procurador, Vice-President of the UIHJ, Amna al Owais, Chief Registrar of the Dubai International Financial Centre Courts (DIFC), Teresa Rodriguez de la Heras Ballell, Professor of Commercial Law at the Carlos III University of Madrid (Spain), member of Unidroit, and Vladimir Yarkov, Professor at the Ural University of Ekaterinburg (Russian Federation), member of the Scientific Council of the UIHJ.

Panel 5 (“Digital Assets… The “Phantom Debtor”) was moderated by Sjef van Erp. The speakers were Robert Emerson, Huber Hurst Professor of Business Law at the University of Florida (United States), member of the Scientific Council of the UIHJ, Marwa Al-Suwaidi, representative and member of the Board of Directors of the Emirates Association of Lawyers and Jurists, Gary Crowe (USA), Administrator at the National Association of Professional Process Servers (NAPPS), Patrick Gielen, judicial officer (Belgium), member of the Innovation Team of the UIHJ, special advisor to the President of the UIHJ, Paula Meira Lourenco, Professor at the Law Faculty of the University of Lisbon (Portugal), member of the Scientific Council of the UIHJ, and Dovile Satkauskiene, Director of the National Chamber of Judicial Officers of Lithuania, Secretary-General of the European Union of Judicial Officers.

The report on the activities of the UIHJ for the 2018-2021 term was presented by Mathieu Chardon and by the Innovation Team of the UIHJ. A very impressive number of actions emerged: nearly 800 events including 744 meetings, conferences, missions, etc., 65 countries visited, and relations with 43 international organisations and institutions, including the United Nations and Uncitral, the World Bank, The International Monetary Fund, The Hague Conference on Private International Law, the Council of Europe and the CEPEJ, USAID, the European Commission, the European Bank for Reconstruction and Development (EBRD), Ohada and Ersuma, the Association of Southeast Asian Nations (ASEAN), Mercosur, the West African Economic and Monetary Union (Waemu), Unidroit, and the Institute of European Law (ELI).

The recent Hague Convention of 2 July 2019 on the Recognition and Enforcement of Foreign Judgments in Civil or Commercial Matters, which aims to facilitate the circulation of judgments around the world, was presented by Ning Zhao, Senior Legal Officer at the Hague Conference of Private International Law. The UIHJ can only encourage each country to join this convention, which is possible even if the country is not a member of the Hague Conference on Private International Law.

Omar Matar Al Mannai, Vice-Chairman and CEO of Emirates Auctions, the main sponsor of the Congress, gave a detailed presentation of the functioning of his organisation, which everyone praised for its modernity and efficiency.

The result of several years of work, the Global Code of Digital Enforcement, was presented during a workshop moderated by Jos Uitdehaag, Secretary of the Board of the UIHJ, by Françoise Andrieux, Natalie Fricero, Professor of Private Law and Criminal Sciences at the University of Nice-Côte d’Azur (France), member of the Superior Council of the Judiciary of France, member of the Scientific Council of the UIHJ, and Sjef van Erp, Professor Emeritus of Civil Law and European Civil Law, University of Maastricht (the Netherlands), President of the International Association of Legal Science, member of the Working Group on Digital Enforcement of the UIHJ.

This Global Code of Digital Enforcement was developed with the support of the Scientific Council of the UIHJ which includes twelve law professors spread over four continents, worldwide specialised in the field of civil procedure and enforcement. Following the retirement of three members, three new members were inducted during an official presentation: Mayatta Ndiaye Mbaye, Professor at Cheikh Anta Diop University in Dakar (Senegal), Director General of the Superior Regional School of the Judiciary of Ohada (Ersuma), Guillaume Payan, Professor at the University of Toulon (France), Director of the Legal Unit of the UIHJ, and Adrian Stoica, Professor at the University of Constanta (Romania), Dean of the Faculty of Law “Ovidius” of this university.

At the end of the presentation of the Global Code of Digital Enforcement, Marc Schmitz presented Françoise Andrieux and Natalie Fricero with the Jacques Isnard Gold Medal to thank them for their involvement for many years in the academic and scientific work of the UIHJ.

To crown the work, a round table on the theme of the congress (“Cyber ​​Justice – New Opportunities for the Judicial Officer“), moderated by David Walker, gathered Christophe Bernasconi, Natalie Fricero, Mayatta Ndiaye Mbaye, Marc Schmitz, and Jos Uitdehaag.

Seven new organisations of judicial officers also joined the ranks of the UIHJ:

The UIHJ is proud to now include 100 organisations from 94 countries on five continents, giving it the status of one of the most important international organisations of jurists.

The international congress of judicial officers traditionally presents its wishes, at the end of the proceedings. The recommendations of the 24th International Congress of Judicial Officers are as follows:

The 24th International Congress of Judicial Officers recommends that:

The elections for the executive board of the UIHJ for the 2021-2024 mandate were held at the end of the congress. Were elected:

In his inauguration speech, Marc Schmitz thanked the countries for the trust they placed in him, as well as the members of his board, the Innovation Team of the UIHJ, the members of the Scientific Council of the UIHJ, and the secretariat of the UIHJ. He confirmed that he would pursue the actions initiated, and in particular relations with major international organisations and institutions as well as with other legal professions.

The UIHJ would like to send its sincere and warm thanks to its host, His Highness, Sheikh Maktoum bin Mohammed bin Rashid Al Maktoum, Deputy Ruler of Dubai and Deputy Prime Minister, Minister of Finance and Chairman of the Dubai Judicial Council, the Courts of Dubai, represented by its Director General, His Excellency Taresh Eid Al Mansouri, as well as the sponsors including Emirates Auctions, both for the extraordinary work accomplished and for the exceptional welcome extended to all participants, who were not only able to benefit from optimal conditions and ideal weather, but also from the Universal Exhibition which was held in Dubai.

The UIHJ also wishes to thank from the bottom of its heart all the speakers for their work, the international organisations and institutions who honoured us with their presence, the congress team, led by David Walker, who worked so hard for nearly three years, supported by the Innovation Team of the UIHJ, as well as all the members of the Scientific Council and associate professors for their involvement in the work of the Global Code of Enforcement.

Finally, the UIHJ would like to thank the nearly 550 participants who insisted, despite the Covid-19 pandemic, in coming to Dubai to attend work of rare density. The UIHJ also expresses its thanks to those who had registered but who were unfortunately unable to travel due to the health crisis.

The location of the 25th International Congress of Judicial Officers to be held in 2024 was voted by the congress: RIO DE JANEIRO!

The UIHJ is already looking forward to seeing you there! 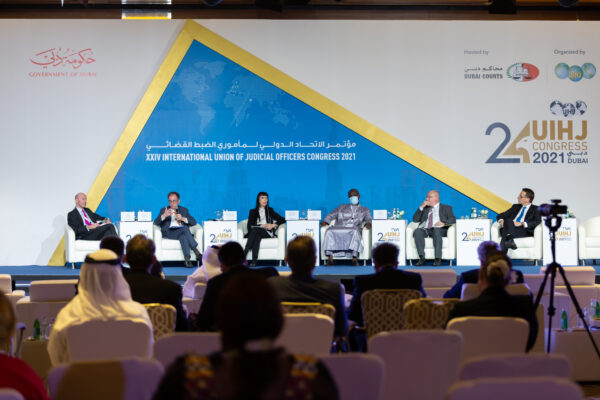 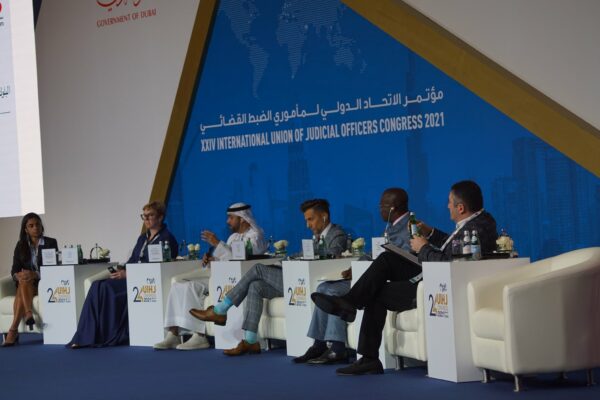 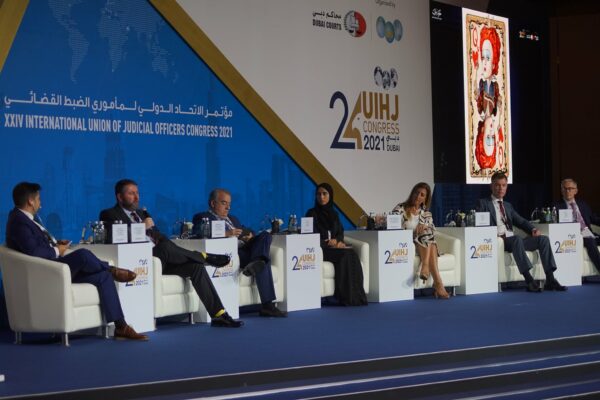 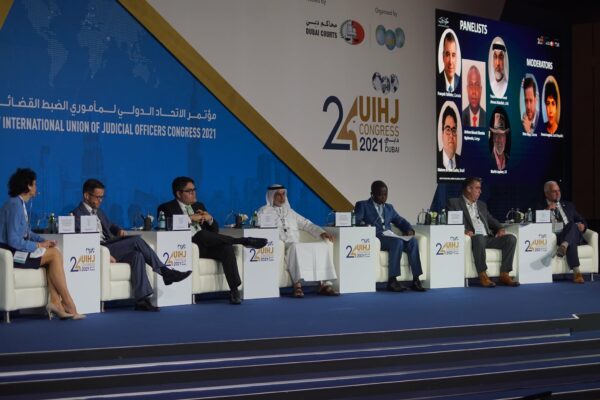 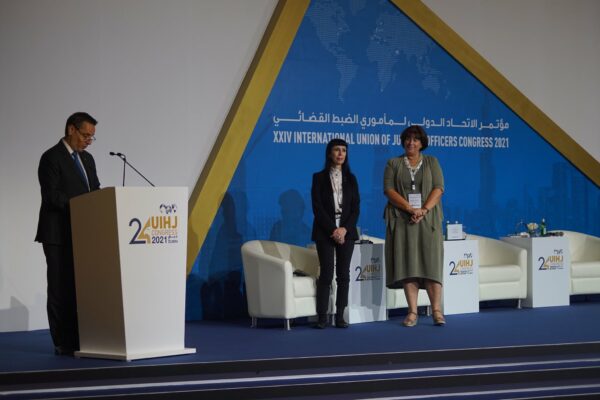 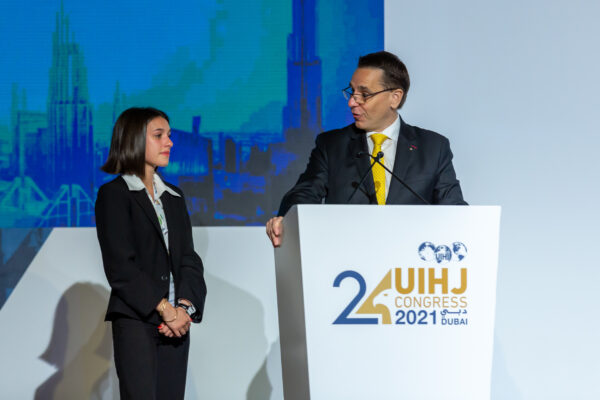 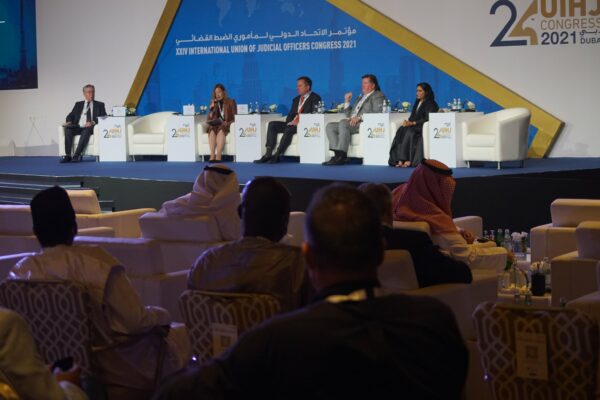 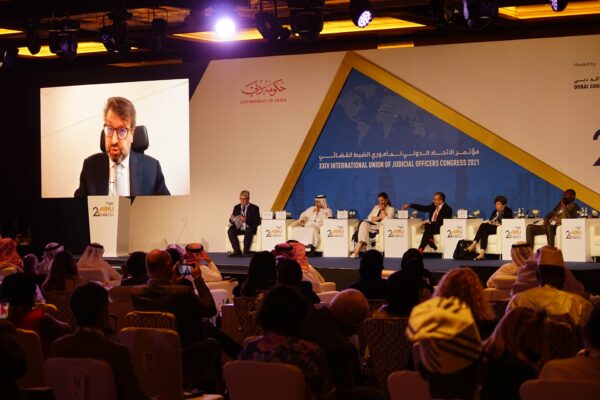 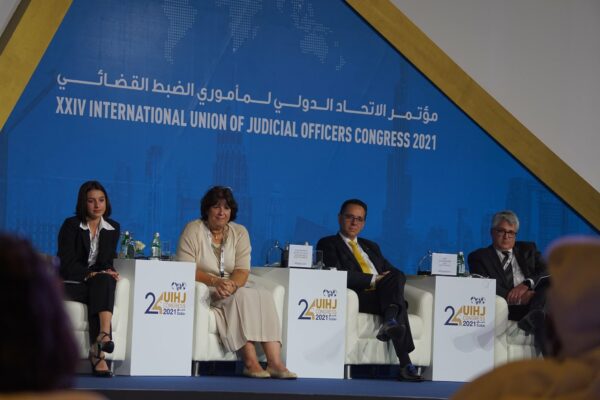 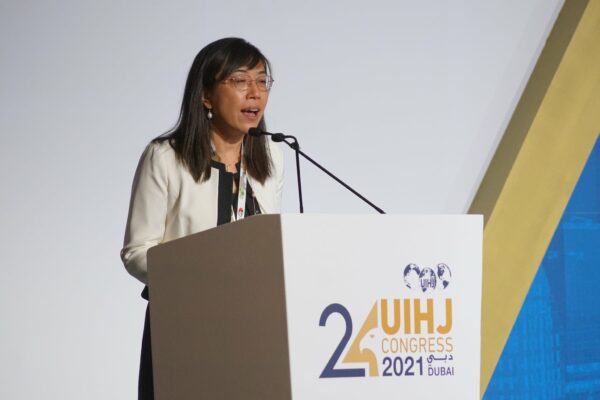 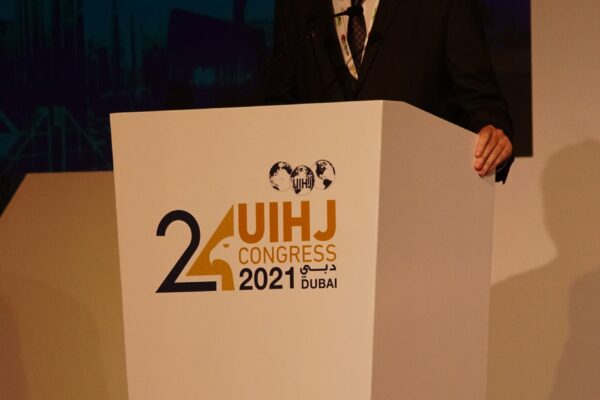 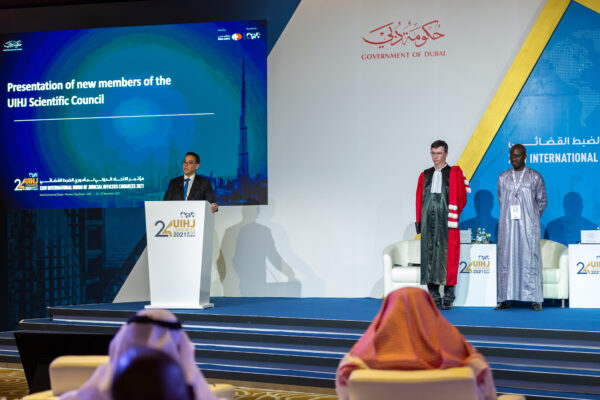 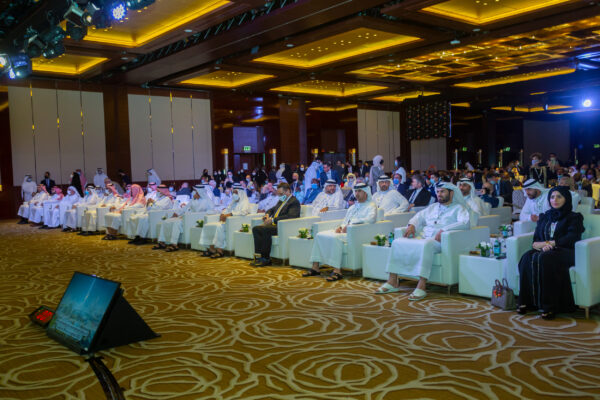 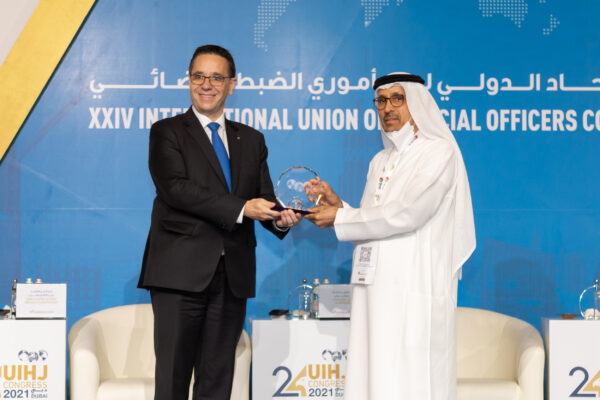 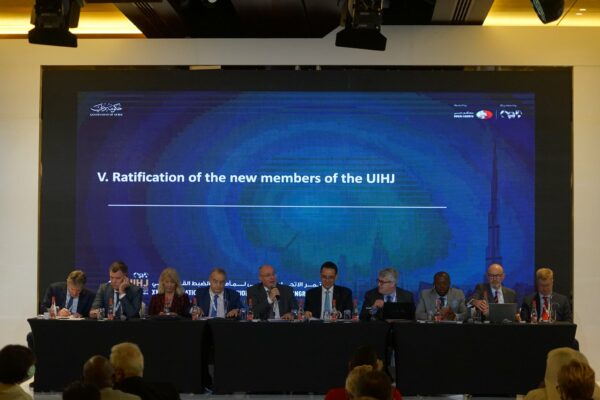 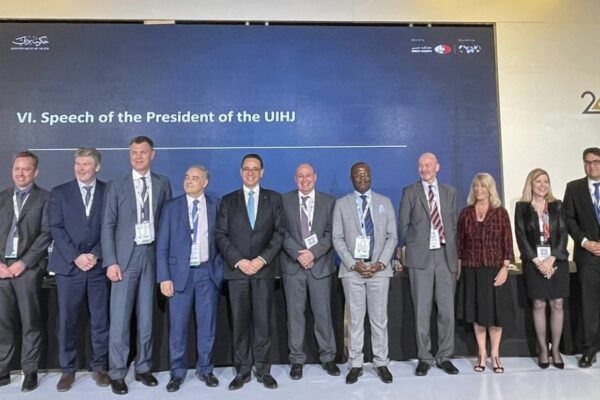 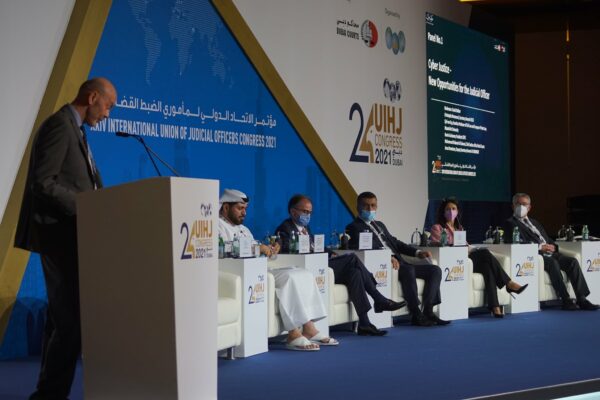 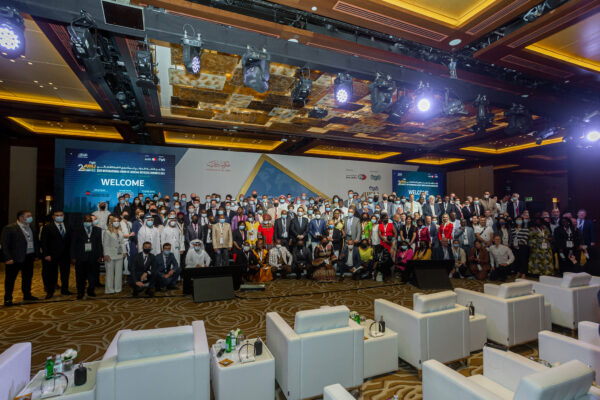 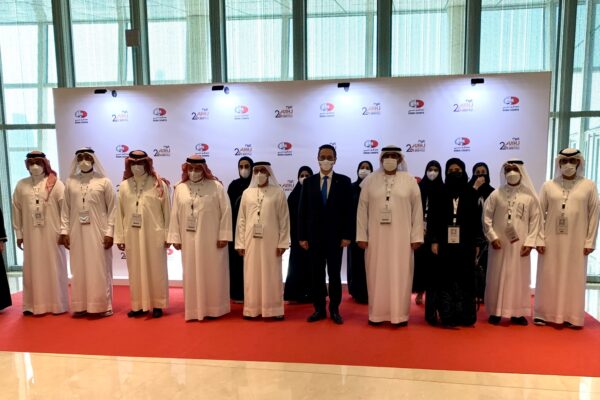 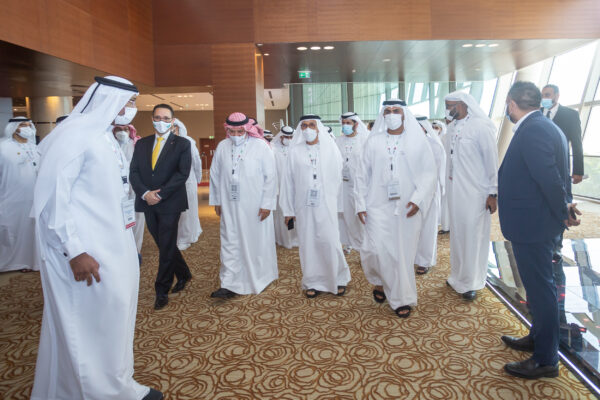