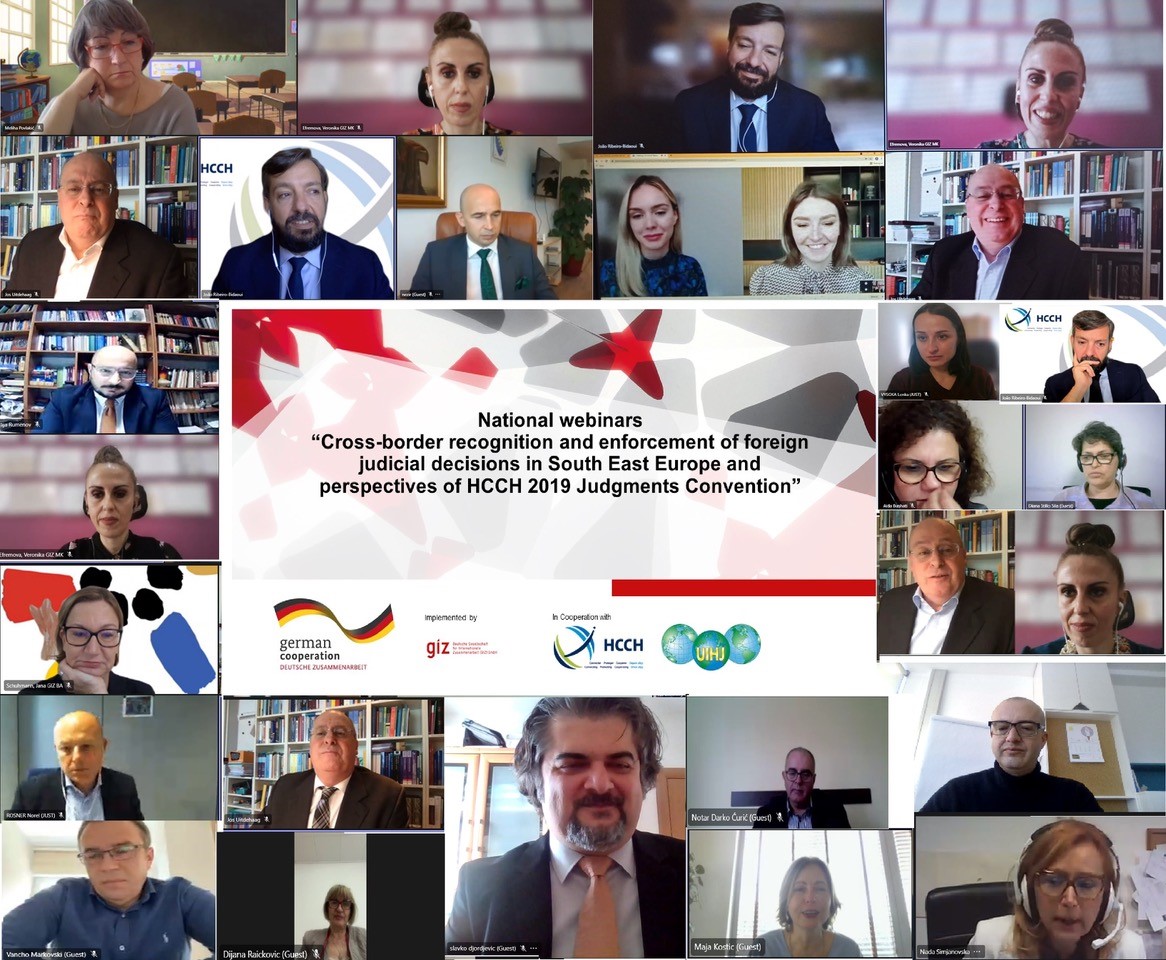 Perspectives of HCCH 2019 Judgments Convention for the Western Balkans

By Marc Schmitz18. November 2021No Comments

The Deutsche Gesellschaft für Internationale Zusammenarbeit (GIZ) in cooperation with the Hague Conference on Private International Law (HCCH) and International Union of Judicial Officers (UIHJ) from 1st to 10th of November organized online national webinars devoted to the cross-border enforcement of foreign judgments and perspectives of HCCH 2019 Judgments Convention for the Western Balkan countries. The webinars brought together the representatives from the key national institutions such as ministries of justice, ministries of foreign affairs, judicial training academies, judges, bar associations, legal professionals, academia, chambers of commerce.

The key findings and detected challenges for cross-border recognition and enforcement of foreign judicial decisions were presented by national legal experts from Western Balkan countries as part of their analysis of the current legal systems, institutional structure, legal practices and existing impediments.

Mr. João Ribeiro-Bidaoui, First Secretary at HCCH presented on the policy flexibility of the HCCH 2019 Judgments Convention by stressing out that becoming a State Party to this Convention would add to the predictability (one regime instead of domestic, bilateral, regional regimes), enable uniform interpretation (to be supported by the HCCH), transnational judicial dialogue, foster trust building among judiciaries and can prove as powerful incentive for integrity of judiciaries. Furthermore, it would make the Western Balkan countries a more attractive forum for foreign investment, prevent unnecessary litigation, provide for more predictable public policy grounds for refusal for requests and enable improved access to justice.

Particularly, he stressed out as a major shortcoming the lack of adequate data and lack of reliable information on debtor’s assets located in a foreign state (e.g. on executors and the enforcement process), as well as the problem with digital assets.

The Roadmap towards ratification of the HCCH 2019 Judgments Convention under domestic structure of the Western Balkan countries was presented by the ministries of justice. They emphasized that they have very strong and profound cooperation with HCCH and UIHJ for decades and will engage into the process to consider signing and ratifying the HCCH 2019 Judgments Convention.

From regional perspective, there is a need for creation of a new regime of mutual recognition and enforcement of foreign judicial decisions in civil and commercial matters in the Western Balkans. The implementation of the HCCH 2019 Judgment Convention by Western Balkan countries is the most appropriate way to establish such regime in order to improve access to justice and facilitate international trade and direct foreign investments.

The accession of the European Union to the Convention on the Recognition and Enforcement of Foreign Judgments in Civil and Commercial Matters of 2 July 2019 was published in the Official Journal on 14 July!