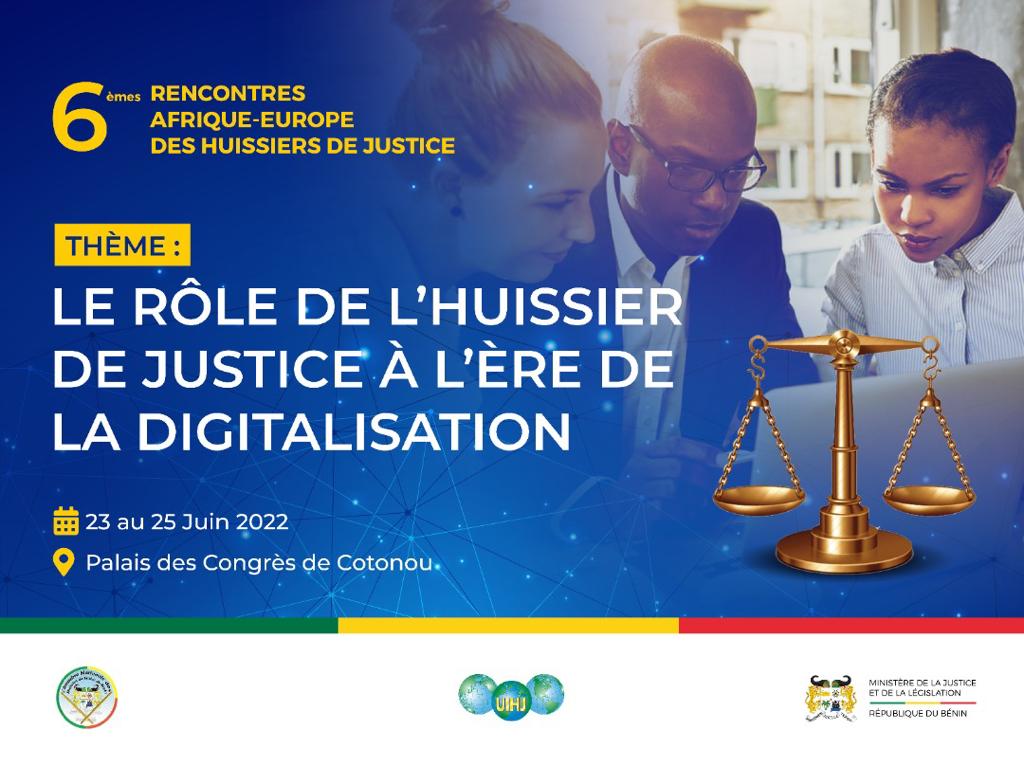 6th Africa Europe Meeting of Judicial Officers Cotonou, from 22 to 25 June 2022 “The judicial officer in the era of digitisation”

With legal professionals, in general, but also with the public, in most legal systems of French-speaking inspiration, the judicial officer remains a major actor whose acts, of almost sacramental value, determine the introduction of procedures, the instruction of these to a certain extent, and the enforcement of the decisions which are rendered. Apart from state litigation, the judicial officer is also a professional whose ministry can constitute a quality recourse, whether within the framework of alternative dispute resolution methods, or out of all disputes, when it is necessary to establish acts whose this professional is a knowledgeable witness or creator.

If, in each State, the corporation is organised into chambers (orders), governed by internal provisions, having its attributions and its timetable for the acquisition of professional skills, the experience of meetings and openness to the international community has already demonstrated that these are useful, both in improving the quality of the mission accomplished for the benefit of citizens and in the management of the profession itself. These meetings even have an anticipatory and forward-looking function, and allow the chambers and their members to compare their thoughts on their profession.

Digitisation is commonly defined as the process that aims to transform an object, tool, process or profession into computer code in order to replace it and make it more efficient. It is a technical expression, which originated at the beginning of the Internet and which continues to improve, the mail being replaced by emails, physical meetings by web meetings and forums, stores by e-commerce sites, etc. It is a real phenomenon that does not only include services, but extends to the ordinary of life, therefore necessarily to administration, the functioning of institutions, law, professions and, for what is in question, to the legal professions. In fact, the digital revolution is disrupting all aspects of life in society.

With regard to the administration and legal professions, it is the rules related to the accessibility of the public service and that of justice which, among other things, have determined these structures to enter the phenomenon of digitisation. If predictive justice is not quite complete and has not yet been the subject of a clear choice on the part of the public authorities, digital technology continues to challenge justice. State and international jurisdictions very early committed their visibility and their modes of presence online, which could not fail to involve judicial officers, notaries, auctioneers, lawyers and other legal professionals, in particular those who are court officers.

As presented, these processes aim not only to replace traditional working methods, but also how to carry them out. This is when, in general, the question arises of the replacement of professions by robots or applications. The judiciary is threatened by it, lawyers are threatened by it, moreover more insistently by the emergence of Legaltech and other online platforms for legal services, with varying degrees of success.

We realise that nothing is granted. Indeed, the parameters are evolving and many concerns arise. Thus, one can wonder for example on the following points: is it still necessary to resort to a judicial officer to carry out a statement of fact, whereas the proof can be reported by a screenshot? Is the summons still useful when the litigant can seize his judge from a computer or his telephone? Is a notification necessary when an e-mail from the court makes it possible to ensure the effective transmission of information in real time and to keep traces of it? Can the judicial officer enforce a court decision in the digital space?

Similarly, a necessary coherence between the new spaces and challenges of the attributions must be made with the modalities of the exercise of the profession. It is indeed quite illusory to conceive of an entirely traditional exercise of the profession that would be harmonious with the digitisation of society as presented. This is why the digitisation of studies and the implementation of Legaltech are becoming an essential professional necessity.

It seems that it is only by contributing to allow the judicial officers participating in the congress to have a better knowledge of the digital challenge of their profession that these 6th Africa Europe Meetings of Judicial Officers will give them the opportunity to take the necessary step back for the profession, in order to reinvent itself and remain knowledgeable professionals and auxiliaries of justice, fully playing their primary role which consists not only in offering them access to law and justice, but also the exercise of rights and court decisions, while ensuring intervention in all professional spaces open to the profession.

The program takes into account the questions raised so that the meetings are a framework for reflection and in-depth exchanges to enable each of the participants and the professional bodies and structures to take the necessary decisions.

Finally, the post-meeting cultural program of 25 June 2022 invites you to a tourist visit to Ouidah, 42 kilometers from Cotonou, the Portuguese Fort and to the exhibition: “Art of Benin yesterday and today: from Restitution to Revelation”, followed by lunch.

To the program
Register now

ERA organised a congress on the occasion of its 30th anniversary

Entry into application of the Brussels II ter Regulation