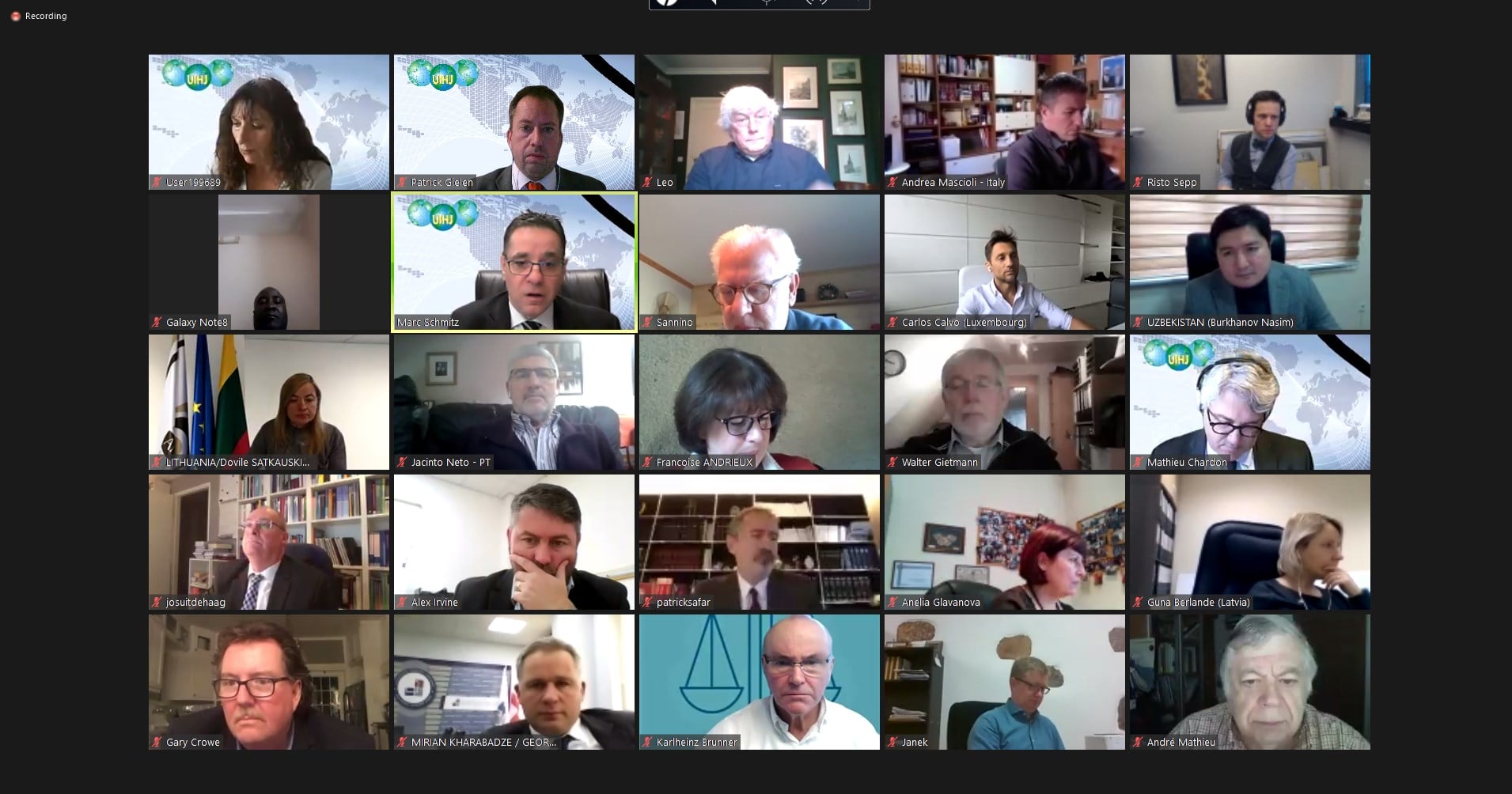 By Marc Schmitz3. December 2020No Comments

Due to the Covid-19 pandemic, the UIHJ organized for the first time on 26 November 2020 a dematerialized permanent council, in the presence of 48 delegations.

The president of the UIHJ reported on the actions carried out by the UIHJ during 2020, despite the Covid-19 crisis which made any travel almost impossible. He observed that the UIHJ has adapted to the situation, like the international organizations and institutions with which it is in contact and, that ultimately, its activity was comparable to that of 2019. He reported on the two videoconferences organized by the UIHJ, one on how the judicial officer could contribute to the economic crisis linked to the Covid-19 pandemic (April 2020), the other on the findings (October 2020). He also highlighted the positive aspects of the consequences of the crisis on the use of information and communication technologies, in particular online platforms.

The Association of Judicial Officers of the Dominican Republic (“Association Dominicana de Alguaciles”) represented by its president, Hipolito Giron, submitted its organization’s membership to the UIHJ, which was unanimously accepted. The Dominican Republic will become, once its candidacy has been approved by the next international congress of judicial officers in November 2021 in Dubai, the 99th member of the UIHJ.

The activity report was presented by the Innovation Team of the UIHJ and by Mathieu Chardon, 1st Vice-President of the UIHJ. This report demonstrates, as President Schmitz indicated, that the UIHJ carried out in 2020 an equivalent number of missions in 2019, due to the multitude of videoconferences which made it possible, despite the pandemic, to continue all the work and projects.

After the financial report, the draft reform of the statutes of the UIHJ was presented and discussed, to be put to the vote of the members of the UIHJ during the next international congress of the UIHJ in Dubai in November 2021.

In particular, the draft Global Code of Enforcement of Digital Assets was presented by Françoise Andrieux. The final version of the project is to be integrated into the Global Code of Enforcement of the UIHJ (2015) and will be presented during the 24th International Congress of Judicial Officers in Dubai in November 2021. Françoise Andrieux and Marc Schmitz insisted on the importance to propose, as soon as possible, guidelines on the seizure of digital assets, in order to encourage countries and international organizations and institutions to adopt them or integrate them into legal texts both internally and internationally, in order to constitute a coherent corpus at global level.

Regarding public relations, President Schmitz presented the new UEHJ website and the renovation of the UIHJ website, emphasizing the importance of social networks.

Several countries also intervened to present the situation in their countries. Argentina and Brazil have expressed their interest in the work of the UIHJ and their support. Dimosthenis Tsirigotis, president of the Federal Association of Judicial Officers of Greece, reported on two eagerly awaited changes for Greek judicial officers: from now on the judicial officers of this country can carry out statements of facts and serve documents electronically.

Finally, David Walker, secretary of the board of the UIHJ, rapporteur of the 24th International congress of judicial officers of Dubai, confirmed the dates of the congress: from 22 to 25 November 2021. He presented the state of progress of the work and invited judicial officers from around the world to convene.

At the end of the Permanent Council, Marc Schmitz thanked the participants for their attendance, the members of the board, the advisers, the Innovation team and the UIHJ secretariat. He wished everyone happy celebrations of the end of the year, hoping to be able to travel again quickly to physically meet all the members of the UIHJ. He announced that the Dubai Congress will be dedicated to the memory of our late President Jacques Isnard.